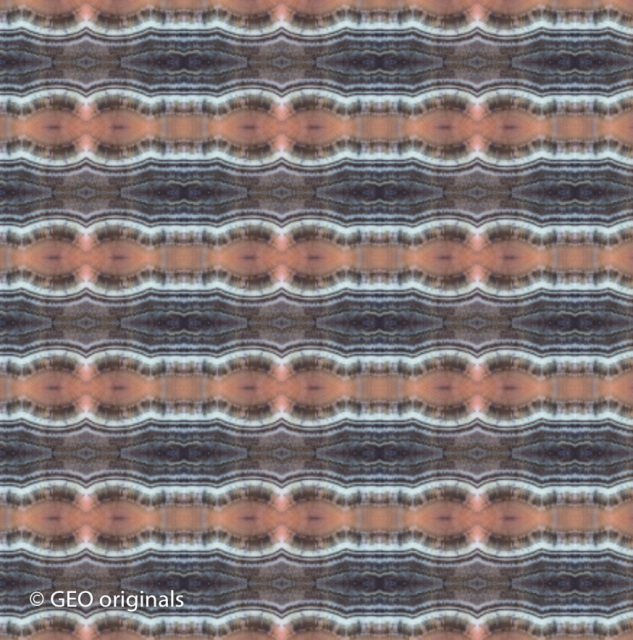 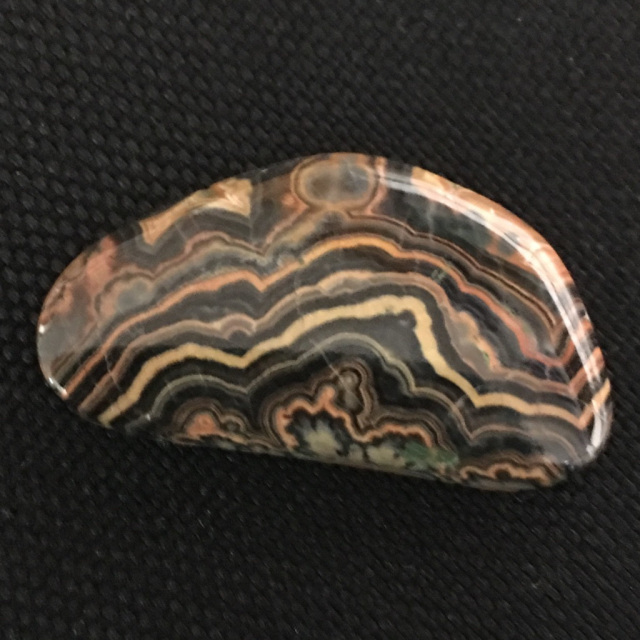 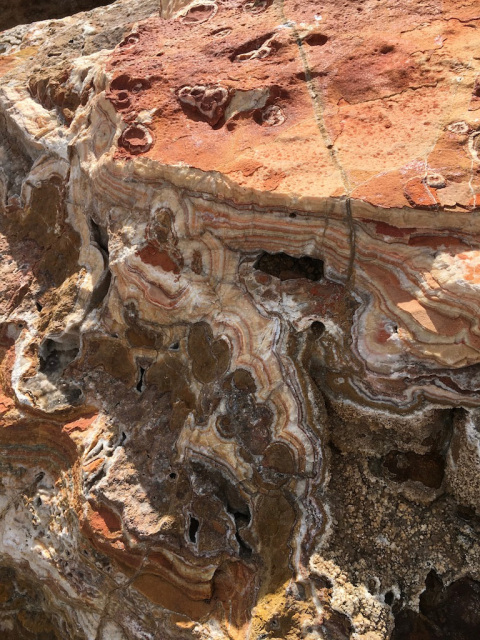 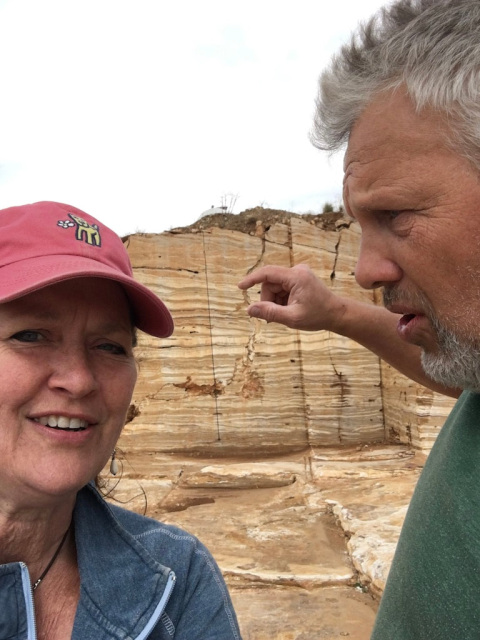 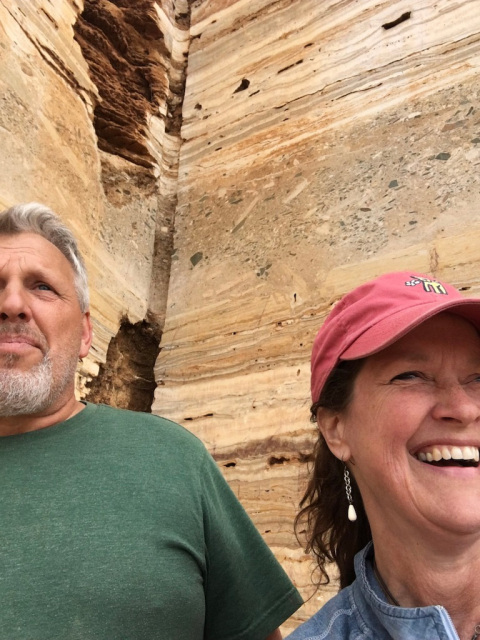 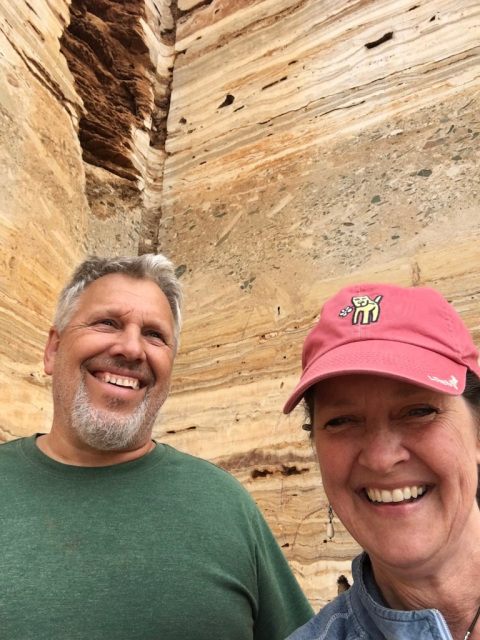 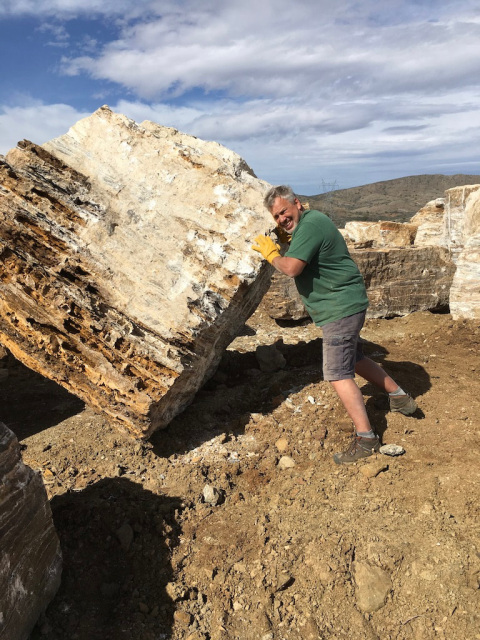 SKU:
$92.00
89 92 $89.00 - $92.00
Unavailable
per item
Add to Cart
Fabric by the Yard
Tubular Onyx
(Yavapai County, Arizona)
GEO 3335
We love our work!  A mutual friend introduced the two of us in 2007 because we both worked with stone!  And here we are... what a life!  It's good!  It can be dirty, hot and heavy. We see snakes, scorpions and big spiders... we've been in an area where there was a recent mountain lion encounter.  We've gone underground and experienced altitude sickness at 14,500 feet above sea level... but we really enjoy ourselves. We've actually figured out how to be business partners and happily married!  Lots of laughter!

I LOVE this article of Nancy Marie Brown form 2001 ~ it's all about how an agate forms.

"Agates are enormously complicated—even beyond what the agateers like Robert Proctor appreciate," says Peter Heaney. He glances toward the array of cut and polished agates lining the windowsill and shelves of his office. "Even in mineralogical terms, this is complicated stuff—or it would have been solved a long time ago.  "According to Proctor, Heaney, an associate professor of geosciences at Penn State, is "one of the world's foremost authorities on agate geochemistry." He's also one of the only ones.  Heaney laughs. "It's not something you do as your direct line of research," he admits. Heaney is funded by the Department of Energy to research a problem in designing geothermal power plants. "The hot water pumped from deep within the earth contains a lot of dissolved silica," he explains. "It clogs up the pipes." How can you stop the silica from sticking to the pipes?

It's like asking, How do you stop an agate: For the secret to making an agate, Heaney believes, is how silica (silicon dioxide, or SiO2) dissolves in water.
An agate starts with a cavity, a void in the rock. The best are found in basalt, a young volcanic rock. "Volcanic rocks that erupt to the surface and harden contain a lot of water and carbon dioxide, which will bubble out," Heaney says. "It's exactly the same as how Swiss cheese is formed. The rock is filled with holes."
Water containing silica percolates through the rock. "The minerals in the water begin to crystallize out." One of the minerals is quartz. Studying agates with by transmission electron microscopy and by x-ray diffraction, Heaney found that 90 percent of an agate is quartz. "But I found there's another mineral that has the same chemical composition, SiO2, and a different structure: moganite. It's like carbon, which can crystallize into both diamond and graphite. Ten percent of an agate will be this other structure, moganite. I think that's an important key to understanding how agates form.

"When you examine an agate with a light microscope, you observe that it consists of fibrous crystals. They nucleate on the wall and radiate inward like spokes on a bicycle wheel. Usually the first layer is a very fine-grained material, chalcedony, which is a mixture of quartz and moganite. Then you have coarse-grained quartz layers—pure quartz, no moganite.
"Why do you see these two different layers? They're both silicon dioxide. What is changing is the crystal structure. "
Another curious thing about the agate fibers is that they twist. They grow in a helical fashion. "A third part of the mystery is the crystallographic direction the fibers are growing. The chalcedony fibers grow perpendicular to the normal growth direction."

These repeating changes in crystal size, type, and direction, Heaney believes, causes the characteristic banding pattern of the agate, the colors coming from trace elements like iron or manganese. "You see oscillation in grain size at many different scales in agates. It's like a Russian doll. There's hierarchical layering. I'm not aware of any completely non-biological mechanism that accounts for this kind of layering in natural materials. How do you explain it?

"I think that the silicate that precipitates onto the walls has to be a little bit polymerized. Not long strings of molecules, as in a protein, but repeat units of five to ten molecules. If the concentration of silica in water gets high enough, the silica polymerizes. This is how it happens—;" He crosses to the blackboard and writes:  "The oxygen serves as a bridge between two silicon atoms. "These polymers get pulled out of the solution and get incorporated into the crystal very quickly. When things are polymerized, they'll crystallize very rapidly. You've overcome some of the initiation energy needed to make the crystal. And because the crystallization occurs so quickly, mistakes are made and weird minerals like moganite are formed. "Soon, though, the polymers get depleted from the solution, leaving isolated Si(OH)4 units. You can crystallize perfect quartz crystals without moganite from these, but it's very slow. At room temperature, you can let the solution sit for two years before you'll see the beginning of the crystallization process." Between the crystal fibers are channels that work by capillary action to pull water into the center of the hole in the rock. "If you have a continuous supply of water feeding silica to the system," Heaney says, "then when the concentration gets higher, the silica will begin to polymerize again and it will begin to crystallize rapidly again. That's why I think an agate has its banding pattern. "This has not been experimentally shown," Heaney says. "You'd have to make an agate, and no one has ever made an agate, though Robert thinks we should try." Heaney and a Russian mathematician, an expert in fractal geometry, are submitting a grant proposal to simulate this oscillating pattern of crystal growth on a computer.

"There is a competing theory that I don't like at all," Heaney adds, "and it's one that Robert favors. You have a gel, a silica jello embedded in the rock, and by adding chemicals you produce periodic bands in it. You can make a silica gel in the lab very easily. You can even get the banding. But when you let the gel dry, it dries to an amorphous or non-crystalline form of silica." While high temperatures or pressures might cause the gel to crystallize, those forces do not come into play. "We know agates form close to the surface of the earth, at low pressures and temperatures," Heaney says, "and not only in volcanic rock, but in dinosaur bones."
We also know agates invariably outlast their surroundings. The encasing rock—or bone—weathers away, leaving just a roundish, rough-coated lump waiting to be picked up and cut and polished.
Peter Heaney, Ph.D., is associate professor of geosciences in the College of Earth and Mineral Sciences, 309 Deike Bldg., University Park PA 16802; 814-865-6821; heaney@geosc.psu.edu.

That may have been a bit too much but it's super cool how agates are formed! Just look at the layers... that's time (millions of years of time) and heat (hot hot hot) and pressure, volcanic stone and water.  And what is created is pretty incredible!If you love agate hunting... head up into Northern Minnesota to Lake Superior.  Take a bucket!